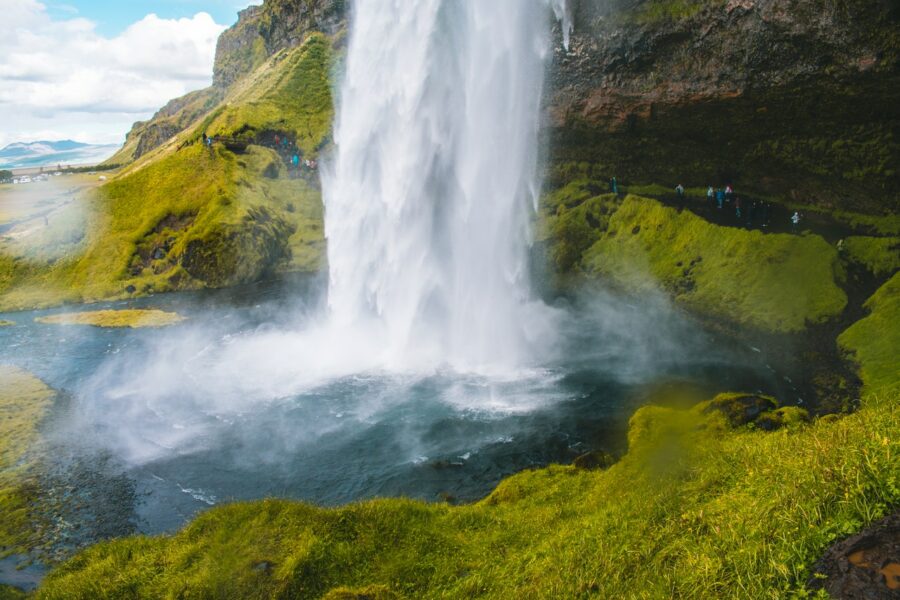 When you think of Hawaii your mind immediately creates beautiful white beaches, blue ocean, tree swing, cocktails… let`s don’t forget the “aloha girls” too. The fact is that this island is even more beautiful from the inside. It has some of the most amazing sceneries, green landscapes and most amazing waterfalls. Some of them got on our list of Hawaii`s Most Gorgeous Waterfalls.

This one is very popular all year round. It located in Hilo (The Big Island). The river on which this waterfall flows is called Wailuku River and it is said that it moves a million cubic meters of water per year. If you are lucky enough while visiting this place around mid-morning you can see a rainbow which will definitely enhance the overall experience. That`s why they are called Rainbow Falls. Also there is a trail of stone steps that will lead you on the top of the falls. From there you will witness an unforgettable sight leading into the turquoise colored pool on the bottom.

Looking down you`ll create a memory that will stay with you forever.

Another amazing waterfall located in the Waimea Canyon State Park (Kauai Island). This majestic site can be seen from various lookouts along the canyon road. The falls are created by a pair of visible tiers fed by the Koke’e Stream with a drop over 800ft. It is also known as the Grand Canyon of the Pacific.

There is a 3-hour round-trip hike to Waipoo Falls and it`s one of Kauai’s best ones. If the time getting there seams long, bear in mind that in the end you can reward yourself with a refreshing splash in the pool created by the falls.

One of the most gorgeous sights you`ll ever see in your life, or on TV screen for that matter. You definitely remember the movie “Jurassic Park” directed by Steven Spielberg which came out in 1993.  In the beginning of the movie there is a scene when a helicopter is carrying scientist on Isla Nublar. If you can remember the background you will surly recognize the Manawaiopuna Falls. They portray a strong image of nature’s untouched beauty and might. So now you know why they are commonly known as Jurassic Falls.

Unfortunately, the 400-foot falls are located on a private land owned by the Robinsons, so the only way to see them is from air by helicopter. Maybe that’s a good thing because they are located in a pretty remote area on Kauai called Hanapepe Valley and getting there by foot can take pretty long time. The good thing  is starting from 2009 Kauai-based Helicopters started landing tourist close to the falls so they have more time to enjoy and see it up-close.

This impressive 1200ft waterfall is located in the deep Papalaua Valley, near Halawa, northern part of Moloka’i Island. It`s a very distinctive area with designated extremely tall sea cliffs, created by volcanic lava over the last 1.5 million years. The area around the falls is filled with deep valleys and lush green vegetation. Almost every steep slope here is roofed with green cover of plants. There are still leftovers from remnants of terraces for growing taro from the time when Hawaiians and later Chinese lived there.

The falls consist of 5 drops most impressive being the middle one and they all end with a pool. Maybe the best period to see this waterfall in his full might is in the rainy season somewhere between November and March.

Kaliuwa’a Falls also known as Sacred Falls are located in Kaluanui State Park, near Laie on Oahu Island. The sad news is you can only see it by air since it was closed in 1999 due to a rockslide accident. There is a swimming pool at the base of the last 80ft drop. The overall height of this astonishing work of nature is 1100ft. When I was doing a research about this falls I stumbled on some interesting Hawaiian folklore stories which stated than A Hawaiian demi-god created Sacred falls. I also learned that Kaliuwa‘a is actually two words combined, “Kaliu,” and “wa‘a,” meaning, “leaking canoe”.

There are many legends connected to this fall and to the other ones as well. So if you are in that kind of stuff you should definitely look it up.

Definitely a must see if you ever have a chance to visit the Big Island.  It`s a spectacular 442 ft drop into a stream eroded gorge.

There is an uphill hike trail that will take you there through a lush rainforest filled with wild orchids. On that path you`ll see another smaller waterfall called Kahuna Falls. A good thing about this waterfall is that it`s easy accessible but you have to pay a few dollars to see it. Given the extraordinary beauty of this place that’s a few dollars well spent.

They say it`s an unforgettable and for some a spiritual experience walking throughout the dense and dark bamboo forest leading into the falls. There, on that absolutely beautiful spot you`ll see a mighty waterfall that drops down a sheer lava rock wall into a boulder-strewn pool.